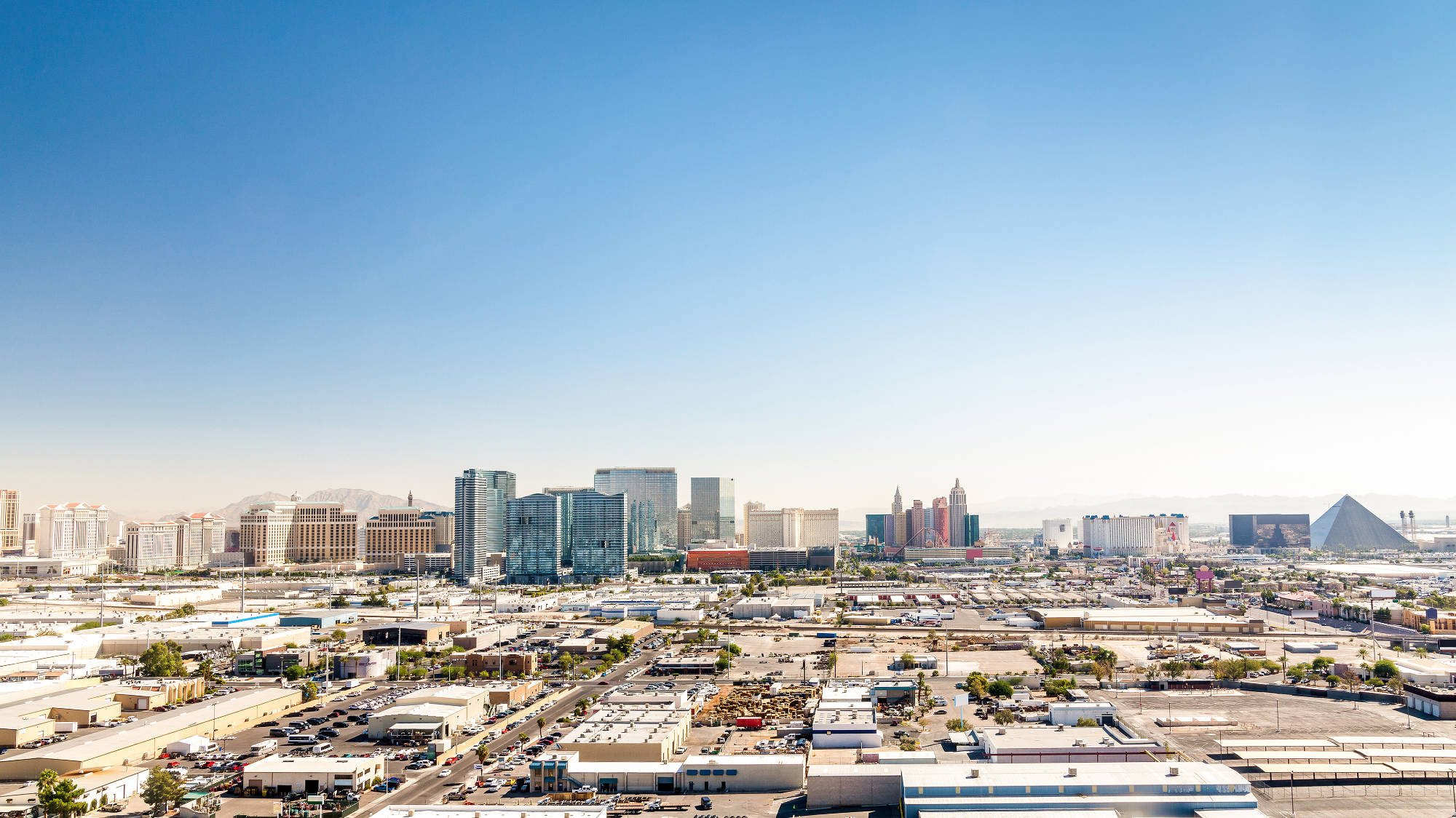 In the past, casinos that were not located on Fremont Street or its immediate vicinity had to be outside the city limits of Las Vegas. Therefore, these casinos were located on South Las Vegas Boulevard, which was outside the official city limits.

Nowadays The Strip is considered as the centre of activities in Las Vegas, while Fremont Street is now referred to as “Down Town Las Vegas”.

A lot of the famous Las Vegas landmark casinos are based on this part of the city, think about Caesars Palace, MGM Grand, Bellagio, Wynn and many many more.

Location of The Strip

The Las Vegas Boulevard runs parallel to Interstate 15 and the section called the Strip is between Sahara Avenue and Russel Road. This is from the casino Mandalay Bay in the south to the Sahara Casino in the north.

Some guide books stretch The Stip a little bit up, and they consider the Strip to be from the Stratosphere in the North and the “Welcome to Fabulous Las Vegas”-sign in the south. This adds around 1.2 km to The Strip.

Formerly, the Strip ran to Tropicana Avenue at the MGM Grand, but due to the many expansions, this border has moved further south. On the north side, the border has remained in the same place all this time because there has been less extensive here.

History of The Las Vegas Strip

The first casino to open on what the Strip is today was El Rancho Vegas. This hotel and casino was opened on 3 April 1941 and had 63 hotel rooms. The El Rancho stood there for almost 20 years until it was destroyed by fire in 1960.

The success of the El Rancho also encouraged other entrepreneurs, and the Las Frontier opened in 1942. The Mafia was very interested in the growing gambling centre and so more hotels were added to the Strip.

One of these was the Flamingo which is the oldest still open hotel on this street to this day.

In 1966 Caesars Palace got opened. It was the first themed casino in Las Vegas. The hotel and casino was meant to give visitors the feeling they were in the Roman Empire, they aimed that the visitor would feel as if he was Caesar himself.

In 1968, the Flamingo was purchased by Kirk Kerkorian who then hired the manager of the Sahara to train staff for the International Hotel which was still under construction.

Four years later, the first MGM Grand Hotel & Casino was opened, also owned by Kirk Kerkorian. This was another casino than the currently existing MGM Grand.

At that time, it was one of the largest hotels in the world. In November 1980, the MGM Grand was faced with the biggest fire in the history of the hotel.

The fire, causing electronics problems, meant the death of 87 people and it took eight months to reopen the hotel. Six years later in 1986, Kerkorian sold the MGM Grand to Bally Entertainment Corporation, and the hotel was renamed Bally’s.

The Mirage, opened in 1989, led to a new construction period of even larger hotels in which many smaller hotels on the Strip were demolished to create large resorts.

These resorts were not just hotels and casinos, but also provided entertainment, for example. This change had an impact on older traditional companies such as The Dunes, Sands Hotel, Stardust and the Sahara.

In the 1990s, the Strip became increasingly different forms of entertainment. This was not always successful: the theme park of the MGM Grand had to be closed again due to lack of interest.

Other smaller facilities such as the Coca-Cola Store M&M World, the Adventuredome and the Fashion Show Mall were more successful.

The arrival of Bellagio, The Venetian and Wynn meant that many older hotels had to invest heavily in order to compete with the big new hotels.

This led to changes in themes at different hotels and the arrival of more nightclubs, bars and restaurants. There were also many more shops and shopping malls on the Strip.

In 2004, MGM Mirage International announced the CityCenter. This became the most expensive privately funded project in the United States. Construction began in 2006 and at the end of 2009, the various hotels were opened. The name CityCenter is not used anymore, now it is referred to as Aria, the only casino which is part of the project.

The Cosmopolitan was built almost at the same time as the CityCenter, which opened its doors in 2010.

The economic crisis also caused problems on the Strip. For example, historic Sahara had to close its doors and major projects such as the Echelon Place could not be completed. The plans for the Las Vegas Plaza were even halted because of the crisis.

The “Welcome to Fabulous Las Vegas”-sign is maybe one of the most famous symbols of Las Vegas. Ted Rogich, a local merchant ordered the sign and it was designed by Betty Willis. In May 1959 the funds for its creation were raised. Shortly thereafter, the sign was placed by Western Neon. Rogich sold it to Clark County.

The sign is located on the middle side of Las Vegas Boulevard South. A lot of people consider the sign as the “official” southern end of the Strip, although it is more than 600 meters south of Mandalay Bay, the most southern casino on The Strip.

In fact, the sign is located about 6.5 km outside the limits of the city of Las Vegas, in Paradise, but both tourists and locals do not like this and refer freely to the entire city as “Las Vegas”.