The cute Chibeasties are back and this time they come baring plenty of gifts. Once more you’ll be taken into the heart of the forest where magic and mystery await. Chibeasties 2 is the sequel to the beloved Chibeasties slot released in 2015. With a plethora of bonus features and 4 realms to explore, players are guaranteed massive wins. 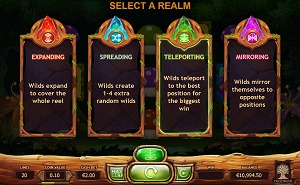 Chibeasties 2 is a 5 reels, 3 rows and 20 bet lines video slot powered by Yggdrasil. The slot starts with a beautiful animated introductory video of the 4 realms. The slot is uniquely designed and Yggdrasil has gone the extra mile with this magical slot. While sequels are never quite as great as the original some would say Chibeasties 2 is an exception. The slot doesn’t just come with a wider variety of features but various magical and rewarding realms.

Players are guaranteed an immersive gameplay on all devices from desktop to mobile and tablets. The slot can be played from as little as 0.20 per spin to a maximum of 100. Coin values range from a low 0.01 per line to a maximum of 5 per line. This medium variance slot is ideal for players with various budget sizes.

Chibeasties 2 is loaded with fun and highly rewarding bonus features. The wild of the slot varies from realm to realm and each realm’s wild functions differently. During the base game you will be able to change your realm at any given time. 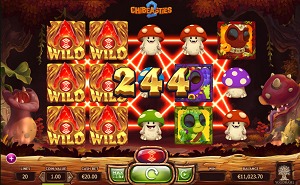 The four wilds allocated to the individual realms consist out of an Expanding, Spreading, Teleporting and Mirroring wild.

Aside from the exciting realm related features, there is also the lucrative Wild Mutation feature. Whenever a spin brings wilds to the reels, this feature will be triggered. After the realm wild feature is completed,  the wild will be able to turn into a wild from anther realm. That means that you’ll not only get your realm set feature, but also an additional realm feature. 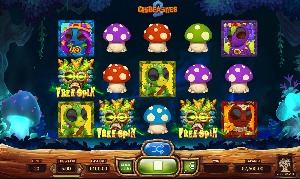 There is nothing better than being transported to a magical forest where the sweetest rewards await. With Yggdrasil’s reputation for creating sublime and top quality slots the adventure is even more enjoyable. The minute you enter the slot you will be greeted by a cinematic intro video oozing magic and mystery. In the video you’ll see one of the bug eyed Chibeasties discovering a magical stone.

The original Chibeasties was a marvellous slot filled with fun, magic and mystery. Chibeasties 2 is a step up and a major improvement on an already perfect slot. Just when you think things can’t get better, they do and you start believing in strange miracles. The bug eyed creatures are the same as in the original slot as they come alive to provide first class entertainment. The soundtrack is a little different but manages to set the atmosphere for the mystical adventure. 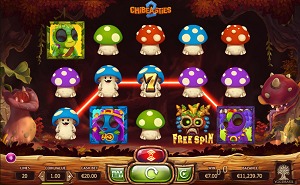 Chibeasties 2 is a very versatile video slot that can be enjoyed by players of various tastes. The graphics and animations make this a fun and captivating slot. And while most will be won over by the Chibeasties there will be others who can’t stand them. If you prefer video slots with a little more poise and mystery then why not try Holmes and the Stolen Stones? It’s filled with adventure, mystery and features the legendary Sherlock Holmes.

Take a sneak peek at the adventure that waits with the Chibeasties 2 slot:

Chibeasties 2 is available on all iOS and Android mobile and tablet devices. The HTML5 software guarantees a smooth and immersive gaming experience. Before attempting to adventure through the forest with these cute creatures check your internet connection. There is nothing worse than being in the middle of a hard hitting feature when the signal cuts out.

Apart from the bet buttons moving around, the slot is identical to the desktop version. As always the minor changes made are to enhance your gaming experience. For some, the mobile Chibeasties 2 experience is even more lethal and rewarding than on desktop.

The 4 realms and variety of bonus features make it impossible to resist the return of the magnificent creatures. The best part of all is that you determine which wild function you’d like on the reels. Definitely a slot we’d recommend to any gamblers looking for an entertaining and rewarding gaming experience. 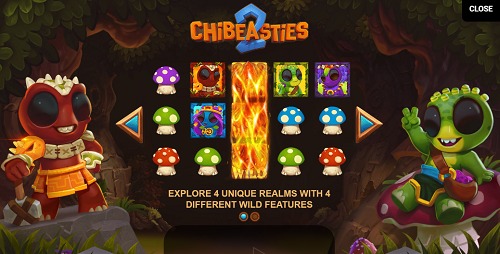